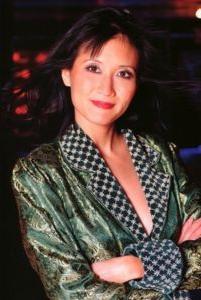 Suzanne Whang (born September 28, 1962) is an American television host, actor, comedian, radio host, published author, minister, writer, producer, and political activist. She is best known as the former host of the HGTV series House Hunters for eight years, and for her recurring role as manicurist Polly Chae on Las Vegas for four seasons. Suzanne is currently starring as Divina the maid / wannabe actress in the Here TV sitcom From Here on OUT.
Whang hosted House Hunters from 1999 to 2007 on Home and Garden Television and had a recurring role as Polly the spa manager on NBC's drama Las Vegas. She made her television debut as a "Road Warrior" (remote correspondent) on the FX network's two-hour morning show Breakfast Time in the 1990s, and later co-hosted the network's Pet Department.

She made a guest appearance on Criminal Minds in the episode, "Poison" in a brief cameo as a local TV reporter.
On October 19, 2013, Suzanne married long-time boyfriend Jay Nickerson at The Church of St. Paul and St. Andrew in Manhattan. The two had met decades prior, working together in theater. They parted ways a year later.