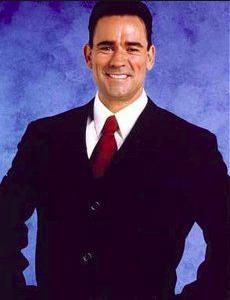 Trevor passed away on June 7, 2003 at the age of 40 in North Hollywood, Los Angeles, California. Trevor's cause of death was suicide by drug overdose.

Trevor Joseph Goddard (14 October 1962 – 7 June 2003) was an English actor. He was best known for playing Kano in the first Mortal Kombat film and Lieutenant Commander Mic Brumby in the television series JAG.
He appeared in cameo roles in many television shows prior to 1995. That same year, Goddard played Kano in the film adaptation of Mortal Kombat. His performance as Kano became the source of the character's evolution in the video games.

He would go on to act in other films such as Gone in Sixty Seconds, Men of War (with Dolph Lundgren and future JAG co-star Catherine Bell) and Hollywood Vampyr. He played a short-tempered mercenary in the 1998 film "Deep Rising" with Treat Williams and Famke Janssen. Goddard played in the television drama series JAG as Lieutenant Commander Mick Brumby and was featured in TV commercials for the Hoover FloorMate.
On 7 June 2003, Goddard was found dead in his home in North Hollywood, Los Angeles, California. He was 40 years old. Initial reports indicated that Goddard was in the process of getting a divorce and that suicide was suspected. An autopsy later showed that Goddard died from a drug overdose of heroin, cocaine, temazepam and vicodin.