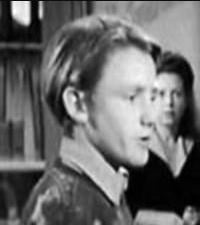 BiographyCharacter: BoxcarBirthday: September 14, 1931Place of Birth: San Diego, CaliforniaDate of Death: February 8, 2011Place of Death: Henderson, NevadaFirst Short: The Pigskin PalookaLast Short: Dancing RomeoNumber of Shorts: 10History: Not much is known about Vincent Graeff. Maltin and Bann erroneously referred to him as Billy Ray "Boxcar" Smith in their book. Born Vincent Bernard Graeff, he was born in San Ysidro near San Diego, California and became a child actor, possibly to help out his family. As a child actor, he got his start in the Our Gang series and went on to playing parts in the movies, "Fighting Father Dunn," "Boys Ranch" and "A Tree Grows In Brooklyn" before going on to several uncredited roles, appearing in about twenty-five movies after until 1951. After leaving acting, he graduated high school and enlisted in the Marine Corps during the Korean War, receiving a Purple Heart while serving in the Fourth Marine Regiment of the 1st Marine Division. After a career as a sheet metal worker, he retired to Redding, California later moving to Henderson, Nevada. He enjoyed being with his family, often filling his time with golfing, boating or fixing things around the house. He truly will be missed. He passed away in 2011 in Henderson, Nevada, leaving behind an obituary. He is survived by his wife Pat, five children, ten grandchildren, and three great grandchildren.