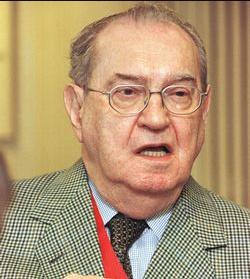 Raymundo Faoro (Vacaria, 27 April 1925 – Rio de Janeiro, 15 May 2003) was a lawyer, jurist, sociologist, historian, writer and president of the Brazilian Bar Association, which in Portuguese is known as OAB (Ordem dos Advogados do Brasil). Even though lawyers have an expressive presence in the political scenery of Brazil, not one President after Faoro gained the same intellectual respect as he did.