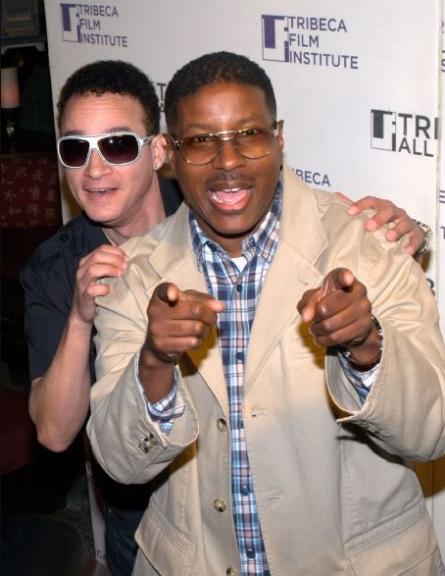 Kid 'N Play is alive and kicking.
Please ignore rumors and hoaxes.
If you have any unfortunate news that this page should be update with, please let us know using this .

Kid 'n Play is an American hip-hop act from New York City that was popular in the late 1980s and early 1990s. The duo was composed of Christopher "Kid" Reid (April 5, 1964) and Christopher "Play" Martin (July 10, 1962) working alongside their DJ, Mark "DJ Wiz" Eastmond. Besides their successful musical careers, they are also notable for branching out into acting.
Kid 'n Play recorded three albums together between 1988 and 1991: 2 Hype (1988), Kid 'n Play's Funhouse (1990), and Face the Nation (1991). Hurby "Luv Bug" Azor, the producer for Salt-n-Pepa (who had been a member of The Super Lovers with Play) served as Kid 'n Play's manager and producer during the early portion of their career. All three albums focused upon positive lyrics backed by pop-friendly instrumental tracks. Among the group's most successful singles were 1989's "Rollin' with Kid 'n Play" (#11 on the Billboard R&B singles chart), 1990s "Funhouse" (#1 on the Billboard rap singles chart), and "Ain't Gonna Hurt Nobody" (another #1 rap hit). The group's stage show highlighted their teen-friendly personalities, and dances such as their trademark, the Kick Step. Kid's visual trademark was his hi-top fade haircut, which stood ten inches high at its peak. Martin regularly wore eight-ball jackets.

Reid continued acting, guest starring in a number of television sitcoms, including Full House, Sister, Sister and Smart Guy and hosting shows such as It's Showtime at the Apollo and Your Big Break. Martin became a born-again Christian, and devoted his time to working on Christian-based hip-hop music projects. He eventually took his industry experience and founded HP4Digital Works, a multimedia company that provides pre- and post-production for film, digital, and live theater productions.
He also founded Brand Newz, an online news magazine focusing on positive community leaders and events. Martin became a professor at North Carolina Central University in Durham, North Carolina (where he now resides). Martin was also a judge for the 8th annual Independent Music Awards. The duo is currently on a tour of the House Party anniversary along with other rappers such as Salt n Pepa.